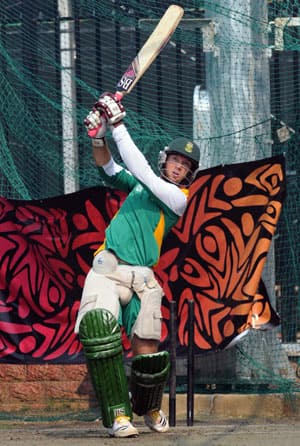 South Africa, who in the past always used their accomplished battery of fast bowlers to blow away rivals, have played three spinners to take advantage of the slow wickets in the sub-continent. Smith has often handed the new ball to either off-spinner Johan Botha or left-arm spinner Robin Peterson even though South Africa boast a formidable pace attack in Dale Steyn and Morne Morkel.

The gamble has appeared to work so far with Peterson taking 14 wickets and leg-spinner Imran Tahir, the third slow bowler in the side, has 12 wickets. “The thing about our three spinners is they’re very different from each other,” said Smith. “They’ve all performed different roles at different times, but worked well together.

“The versatility of the guys has been great. Imran’s definitely been the more attacking option for us. To have him in the line-up adds a bit more to me as a captain.

“Robbie (Peterson) has been around for a long time but it is only now that people have started to show a lot of confidence in him as a cricketer. Through that faith and confidence, he’s starting to believe more in himself.

“Spinners love being here, especially South African spinners. They don’t get as much help back home, so to be able to execute their skills in these conditions is very exciting for them.”

Smith attributed South Africa’s impressive run in the tournament which saw them top Group B with five wins in six matches to contributions from everyone in the squad. It also made picking the right combination difficult, he added.

“Selection has always been tough and it’s getting tougher as guys perform well,” he said. “It’s an ideal challenge to have players performing well and that you have a good squad of players to pick from. We are not relying on four, five guys to win us the World Cup.”

In five previous tournaments, the Proteas crashed out three times in the semi-finals, once in the quarter-final and another time in the first round, earning them the unwanted tag of cricket’s perennial chokers.

South Africa know New Zealand will not be pushovers — the Kiwis have won three of their five World Cup meetings against them, including a five-wicket success in the Super Eights round of the 2007 edition.

“New Zealand have always been a very street-wise, street-smart team,” said Smith. “They have obviously got some power-batters in the top order, guys who can take the game away from you. From the bowling point of view, they can take the pace off the ball as a lot of their guys can bowl medium-pace or change of pace. And they have got a spinner like (skipper Daniel) Vettori.
“You can’t take any guy in their line-up for granted. We need to play well to beat them.”

“I’m sure he believes he can add value to their environment, but our environment has changed a lot since Allan was a part of it.”