England who looked to go into tea as wicket-less perished with Steven Finn getting AB De Villiers out on 88. Finn who had troubled De Villiers through-out the day manage to bounce him out. De Villiers who pulled straight into the leaping James Anderson, who had missed his catch last night. Amla who was not out at 91 managed to get his 24th Test ton with a lovely four. In his innings of Amla also manged to get past 7,000 Test runs for South Africa. England had hopes of picking wickets with the new ball but to their luck everything that took the edge either fell short of the fielder or was dropped. Amla(132*) and Faf du Plessis(15*) take South Africa into tea placed 290 for 3 still trailing England by 339 runs. Live Cricket Scorecard: South Africa vs England, 2nd Test at Cape Town

Steven Finn who had  bowled his hard out managed to get De Villiers, after he was let down many times, including a cut which was dropped by Nick Compton at point, De Villiers was on 85. Finn has easily been the more dominant of English bowlers, more so against De Villiers. De Villiers also survived a lbw call from Ben Stokes, which was over turned by third umpire in an review.Amla and De Villiers have so far had 183 run stand continuing from 56* on Day 2. Live Cricket Score, South Africa vs England 2015-16, 2nd Test, Day 3 at Cape Town

Amla’s last Test hundred was way back in December 2014 against West Indies at Centurion, South Africa will hope that Amla’s emulates the 208 again vs England. 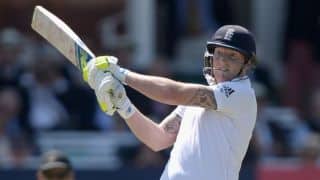