South Africa have the advantage in hand for this match against Australia.

As South Africa play the second One-Day International (ODI) against Australia, opener Rilee Rossouw completed his 1000 ODI runs. Rossouw looked in attacking mode from the beginning of the innings as he went all guns blazing against the inexperienced bowling of Australia. Playing at The Wanderers Stadium, Johannesburg, the debutants failed to do justice with the ball against the home team and were hit all around the park. Rossouw has so far played 33 ODIs scoring a couple of centuries and six half-centuries. Rossouw eventually got to his 34th half-century in the match while hero of last match, Quinton de Kock departed early, scoring only 22. LIVE CRICKET SCORE: South Africa vs Australia, second ODI at The Wanderers

Australia coach Daren Lehmann had earlier revealed that the three pacers, Daniel Worrall, Chris Tremain and Joe Mennie, in the series. Worrall made his debut in the first match but failed to take any wickets. According to Lehmann, Tremain is one promising bowler with the new ball in hand. However, the start of his international bowling did not turn out to be as fruitful as he was hit all over the park. Rossouw was 9 runs short of touching the landmark and hit two boundaries to get to the landmark.

South Africa have the advantage in hand for this match. The team won the series opener with ease as de Kock scored a brilliant 178-run knock. He was supported well by Rossouw at the other end who scored a good 63. Among the bowlers, Andile Phehlukwayo did a very good job picking up 4 wickets. George Bialey for the visitors was the best performer with the bat scoring 74 while Scott Boland was the only successful bowler with 3 wickets. 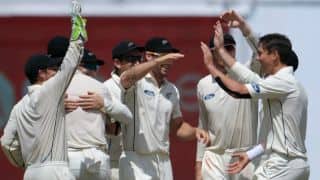