Australian coach Darren Lehmann said his team s top order batting needed to improve after they struggled against a Morne Morkel-inspired South African pace attack on the second day of the third Test at Newlands on Friday.

Morkel took his 300th Test wicket as South Africa bowled themselves into a strong position.

But it could have been worse for Australia. They were in deep trouble at 175 for eight before Nathan Lyon hit a Test-best 47 in a ninth wicket partnership of 66 with Tim Paine, who was unbeaten on 33.

Lehmann praised the partnership between Lyon and Paine.

The runs at the end were vital in terms of the game, but the top order batting has got to improve. We have to make the bowlers keep coming back.

Morkel, who will retire from international cricket after the series, took three of the first four Australian wickets to fall and became the fifth South African to join the 300 Test wicket club.

His victims included Australian captain Steve Smith, the number one batsman in Test cricket, who was out for five, fending a viciously-climbing ball to gully.

Morkel s 300th wicket came when he broke a 78-run stand between Cameron Bancroft and Shaun Marsh when Marsh flashed at a wide ball and was caught behind.

Bancroft made 77 off 103 balls with 14 fours but was leg before wicket to Vernon Philander in the last over before tea to leave Australia in a precarious position.

Morkel, 33, playing in his 85th Test, took a fourth wicket when Lyon s adventurous 38-ball innings was ended by a catch by Dean Elgar running back from point. He finished with four for 87.

It was a bit of a disappointment that we didn t get that wicket earlier, said Morkel.

We have to come back and get that last wicket early tomorrow. A lead of 60 on this wicket is still fantastic. It s going to be harder (for batsmen) on the last couple of days.

Earlier, Kagiso Rabada was hit for five boundaries in a row by David Warner but won a duel with the Australian opening batsman when he sent Warner s off stump cartwheeling.

Warner was bowled for 30. He hit three fours off the last three balls of Rabada s second over, then hooked the first ball of Rabada s next over for six. He sliced a no-ball for four, then was bowled by a ball which went between bat and pad with Warner stuck on his crease.

Rabada, who had a two-match ban for making contact with Australian captain Steve Smith overturned before the Test, ran down the wicket to celebrate but did not go near the batsman.

But Warner appeared to react to a comment from a spectator in the members pavilion, stopping and turning as he climbed the steps to the dressing room.

Lehmann labelled as disgraceful behaviour by some spectators on Friday and said he has lodged an official complaint.

You are talking about abuse of various players and their families and personal abuse, said Lehmann.

It s not on at a cricket game, not just here, it shouldn t happen. You can have banter, that s good fun, but it s gone too far here.

South African opening batsman Elgar equalled a world record when he carried his bat through a completed innings for the third time.

Elgar finished unbeaten on 141. Only Desmond Haynes of the West Indies had previously batted through a Test innings on three occasions.

Smith also equalled a world record when he caught South Africa s last two batsmen for a total of five catches in the innings, the joint most by a fielder.

Although ten other fielders shared the record, Smith was only the second Australian to achieve the feat after Vic Richardson in 1935-36. William Porterfield lashes out at ICC 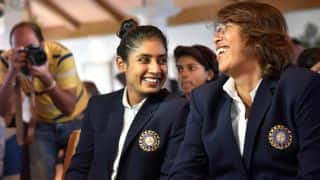