The Australian bowling unit seek to avoid the first series loss by Australia in South Africa since Ali Bacher led the team, then known as the Springboks to a 4-0 clean sweep in 1969-70.

South Africa will aim to take advantage of a scandal-hit Australian team in the fourth and final Test starting at the Wanderers Stadium on Friday. But coach Ottis Gibson has warned that Australia will provide strong opposition, even without the disgraced trio of Steven Smith, David Warner and Cameron Bancroft. “We hope they’re very shattered,” Gibson said of the turmoil around the opposition camp. “But they’re still a good team with very good players. I’m still a huge fan of their fast bowling attack.”

The Australian bowling unit remains intact but there will be three enforced changes in the batting line-up as the tourists seek to avoid the first series loss by Australia in South Africa since Ali Bacher led the team then known as the Springboks to a 4-0 clean sweep in 1969-70. South Africa lead the current series 2-1 and captain Faf du Plessis said after his team won the third Test in Cape Town by 322 runs that he was determined to maintain the pressure on his opponents.

The loss of Smith and Warner robs Australia of their two leading batsmen but neither made a major impact in the first three matches. Their replacements, Matt Renshaw, Joe Burns and Glenn Maxwell will only have one practice opportunity before the Test, but all three arrive with good recent form in Australia s Sheffield Shield competition.

While Renshaw and Burns are set to open the batting in place of Warner and Bancroft, Smith s place is expected to be taken by Peter Handscomb, the reserve batsman on tour, with Maxwell likely only to have a back-up role. Handscomb s only match practice since the tour started was in the warm-up game against South Africa A last month when he failed in both innings.

Burns made a promising start to his Test career but it came to an abrupt halt after he was out for one and nought in his only previous appearance against South Africa in Hobart in 2016-17. He was one of five players jettisoned after Australia crashed to an innings defeat which sealed a series loss. Renshaw and Handscomb both made their debuts in the next Test, when Australia gained a consolation win in Adelaide.

The left-handed Renshaw lost form and was replaced by Bancroft for the Ashes series against England earlier this season. But he has been a prolific scorer in the Sheffield Shield.

In recent seasons South Africa have opted for all-pace bowling attacks for Tests at the Wanderers. If they do include left-arm spinner Keshav Maharaj, who made crucial breakthroughs in Cape Town, they may opt for uncapped all-rounder Wiaan Mulder as a seam bowling back-up. 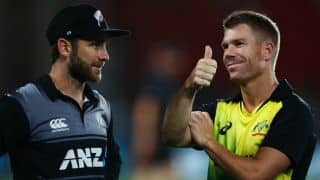