David Warner has blamed the poor start in each innings for the loss of consecutive two One-Day International defeats against South Africa.

David Warner has blamed the poor start in each innings for the loss of consecutive two One-Day International defeats against South Africa. Warner was speaking after the 142-runs loss in the second ODI against South Africa at Johannesburg. He furthermore stated that the Australians were unable to recover from the mammoth total of 361 for the loss of 6 wickets posted by the hosts was just too much for them. South Africa captain Faf du Plessis posted his career s sixth ODI ton to put the hosts in a dominating position. South Africa has already won the first two ODI s of the five-match series, in which opener Quinton de Kock produced a swashbuckling knock of 173 runs in the first ODI to kick start the series with a win. FULL CRICKET SCORECARD: South Africa Vs Australia Live Score 3rd ODI at Kingsmead Durban

“We didn’t start well,” Warner was quoted saying according to espncricinfo said after the game. “We always talk about trying to start well with the bat and the ball in the first 10. We lacked that a bit today and I think our energy and intent was probably lacking. But look when a team puts 360 on the board, it’s always going to be a tough chase. You have to start positive and try not to lose too many wickets in the first 10. It’s unfortunate today but we’ve got another chance to come back and show up again in Durban.”

Moreover, Warner also accepted that the Proteas took off from the very first over and that the Australian pacer duo of Chris Tremain and Joe Mennie had to suffer the wrath of du Plessis and another opener Rilee Rossouw which made the conditions worse for the visitors. Mennie finished his spell of 10 overs with the figures of 0 for 82 which are the worst figures ever for any Australian bowler on his ODI debut.

You’ve got to play the cards that you’re dealt and at the moment we’ve got two young guys making their debut. We do have a young attack but they’ve done everything they can to be here and be in this position to play for the country. It’s going to be a learning experience for them especially today.

“They have to go back and reflect on what they can do better, especially in the first 10. With Starc and them out, it is what it is. We have to deal with it and we can only control what we can at the moment and that’s with the guys that we have.”

Talking about their batting effort, the Australian vice-captain stated, “We have to get hungry and we have to be hungry,” Warner said. “We are that on our day. Obviously, it hasn’t been our day the last couple of games but we have to keep having that positive mindset and go big. We’ve seen the wickets. They’re very very good wickets and if you get in today I played probably a poor shot. I’ve had a couple of soft dismissals. A few of the guys got caught down the leg side.” 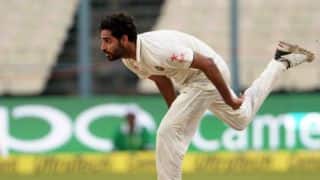