Dean Elgar held the South African innings together till he was there.

And well, so that’s the end of Day One. An abrupt end for sure. Michael Clarke called for the 2nd new ball, but umpire Kumara Dharmasena told if he took it, they can’t continue anymore in the bad state of light. And Clarke said he was fine with calling it a day. So that’s it for today then. Another day in this series belongs to Australia. AB de Villiers has much on his plate for tomorrow. Here’s the day report. Join us tomorrow again for the second day’s play.

S Africa 214/5 l Overs 83
de Villiers 51(126), JP Duminy 2(15)
Another 50 for AB de Villiers. How good is this guy. No matter what the conditions are, how the pitch is, he gets the runs.
S Africa 208/5 l Overs 82
de Villiers 46(123), JP Duminy 1(12)
de Villiers is carrying along nonchalantly. Not long to go for the close of play. He will be wary of how crucial it is for him and Duminy to preserve their wickets here.
Lyon, on the other hand, is really getting the ball to talk.
S Africa 201/5 l Overs 77
de Villiers 35(102), JP Duminy 0(0)
And de Kock’s impatience gets the better of him. Reckless shot from him results into a top edge, and comfortably taken at mid-off by 12th man, Moises Henriques.
Part timer Steven Smith gets a wicket.
OUT! Quinton de Kock 7(17)
S Africa 193/4 l Overs 76
de Villiers 34(101), de Kock 5(15)
de Kock is looking for some quick runs here. He is getting impatient when the square cuts are not finding the gaps.
Australia will be liking this intent from de Kock. Gives them a sniff of a wicket.
S Africa 187/4 l Overs 73
de Villiers 29(91), de Kock 4(7)
With de Kock and de Villiers, may be we can expect a momentum shift in terms of run rate now.
Siddle is now bowling his 21st over. The most by any of the Australian today. He still looks the freshest of the lot. Talk about fitness.
S Africa 181/4 l Overs 70
de Villiers 27(77), de Kock 0(3)
And Lyon breaks another partnership. And another soft dismissal. Elgar clearly lost his concentration, and skied a slog, only to be caught at short third man. What a poor end to a brilliant innings.
Debutant Quinton de Kock comes in now.
OUT! D Elgar 83(193)
S Africa 181/3 l Overs 69
D Elgar 83(190), de Villiers 27(77)
The second new ball will soon be available. Meanwhile, Elgar is closing in on what could be a fantastic century. He is 17 short off it. Will he reach there by day end? Tough question.
The lights in the stadium have taken full effect.
S Africa 173/3 l Overs 66
D Elgar 76(181), de Villiers 26(68)
The 50-run partnership between the two batsmen is up. While Elgar is looking to end the day not out, de Villiers is charging now and then.
S Africa 167/3 l Overs 63
D Elgar 71(166), de Villiers 25(65)
de Villiers is making a move on here. He dispatches two half volleys for fours.
South Africa would really like some quick runs before the new ball is taken.
S Africa 159/3 l Overs 61
D Elgar 71(160), de Villiers 17(59)
We are witnessing a rather dull period of play here. The batsmen are leaving almost everything.
S Africa 149/3 l Overs 58
D Elgar 65(152), de Villiers 13(48)
Mitchell Johnson starts proceedings after tea with a loosener bouncer. And Elgar soon retaliates with a classical straight drive for four.
We are in for an interesting last session.

South Africa will be considerably happy with their post-lunch session performance. Here’s the tea report.

And we are back for the post-lunch session here at Port Elizabeth. Australia will look to peg back, while South Africa will like to continue from where they left off.

We have had an interesting first session on Day 1. Australia struck early, but South Africa have fought back. Faf du Plessis and Dean Elgar have looked solid so far. Here’s the lunch report. Stay with us for the next session’s action.

The news from the centre now is that South Africa have won the toss and have elected to bat first. They have brought in three changes to their XI, compared to none by the Aussies. 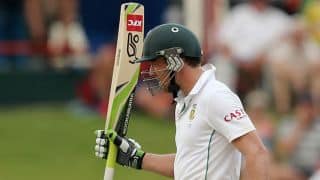 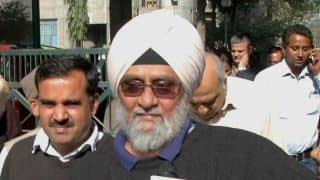