South Africa are in firm control of the second Test.

And that’s the end of another exhilerating day of Test cricket between South Africa and Australia. South Africa enjoy another day of domination, as they take firm control over the second Test at Port Elizabeth. They are 369 runs ahead, and will look to gain a winning position on Day Four. Here’s the day report. Join me tomorrow again.

And that’s Tea on Day 3. South Africa are still in control of the match. They have been in control for two days now. Can Australia come back? Can they find a hole to drive through? Here’s the Tea Report.

Aus 246 l Overs 57
P Siddle 11(19)
Morkel ends the Australian innings. Harris the last man to go. This has been an exceptional comeback by the South Africans after the drubbing in the first Test so far.
Let’s see how they bat second time round.
OUT! R Harris 26(26)
Aus 235/9 l Overs 55
R Harris 20(17), P Siddle 7(16)
Ryan Harris is scoring a few useful runs for the visitors here. Any amount of runs at this stage will be extremely valuable to the Aussies.
Aus 210/9 l Overs 51
R Harris 4(4), P Siddle 0(5)
Morne Morkel does the job yet again in this innings. He gets the big wicket of Steven Smith straight after lunch. This is brilliant stuff from the tall paceman.
Final man, Peter Siddle is in now.
OUT! S Smith 49(72)
Aus 209/8 l Overs 50
S Smith 49(70), R Harris 4(4)
And we are back with the second session of the day now. How long can Australia bat for here?

And we are back now for the post-lunch session.

South Africa might look to enforce follow-on upon Australia here. The visitors still have Steven Smith in the middle, who can push that total to something respectable. Here’s the lunch report.

Aus 205/8 l Overs 49.2
S Smith 49(70)
Mitchell Johnson’s brief innings comes to an end, as Duminy takes off his off-stump. And the umpires have called it lunch on Day 3.
South Africa will be delighted with their performance so far.
OUT! M Johnson 27(23)
Aus 204/7 l Overs 49
S Smith 48(69), M Johnson 27(22)
Oh, what a contest between Mitchell Johnson with the bat and Morne Morkel with the ball. Johnson is getting a dose of his own medicine.
Morkel hits him straight on the crest on the helmet. Rattling stuff.
Aus 195/7 l Overs 46
S Smith 43(55), M Johnson 23(18)
Mitchell Johnson is scoring some valuable runs here. Two boundaries of that over. He is taking the attack to Duminy.
Aus 170/7 l Overs 41
S Smith 39(42), M Johnson 2(1)
Oh, Dale Steyn! you beauty! Brad Haddin is castled by the sharpest of inswingers. His middle stump is missing.
Mitchell Johnson is the new man in.
OUT! B Haddin 9(25)
Aus 168/6 l Overs 40
S Smith 39(42), B Haddin 9(20)
This is bad news for South Africa. Wayne Parnell has pulled a hamstring, and he is walking off the field here.
Graeme Smith now has a bowler less. Dean Elgar completes the over.
Aus 157/6 l Overs 38
S Smith 31(35), B Haddin 6(15)
Both the batsmen have got a life each now. Two catches dropped — South Africa will be unhappy with their fielding so far. Australia could very easily have been 8 down here.
Aus 146/6 l Overs 35
S Smith 21(18), B Haddin 5(14)
Dale Steyn now comes into the attack. He is right on the money here. Brilliant length, making the batsmen play and he is getting the cherry to talk. This is wonderful bowling from the South African pacers.
And Dale Steyn is getting some reverse swing here.
Aus 146/6 l Overs 34
S Smith 21(18), B Haddin 5(8)
South Africans are using the short ball ploy against Smith and Haddin from Morkel’s end, and then exposing them to some beautiful swing bowling from Philander. This is good captaincy by Smith. Meanwhile Smith has played a couple of glorious drives on either side of the wicket.
And Morkel is clocking some serious speeds here. He is continuing from last night for sure.
Aus 133/6 l Overs 31
S Smith 12(7), B Haddin 1(1)
South Africa get off to the perfect start here. Nightwatchman, Lyon’s resilience comes to an end. Morkel gets his man.
Brad Haddin now comes to the crease. Australia will require a huge partnership from these two men now.
OUT! N Lyon 15(43)
Aus 128/5 l Overs 30
N Lyon 15(42), S Smith 8(3)
And that’s the big wicket! Philander gets David Warner. Full delivery outside the off-stump, Warner edges and taken easily at 1st slip by Graeme Smith.
Steven ‘crisis-man’ Smith is the new man in. Can he rescue his team again?
OUT! D Warner 70(78)
Aus 120/4 l Overs 29
D Warner 70(75), N Lyon 15(42)
Morne Morkel has started off right on the money here. He is trying to get into the rib cage of the batsmen.. Graeme Smith has kept both a silly point and a short leg.
Aus 116/4 l Overs 26
D Warner 69(73), N Lyon 12(26)
Vernon Philander starts proceedings. David Warner starts off with a boundary off the first over.

Hello and welcome to the live updates of Day Three of the second Test between South Africa and Australia at Port Elizabeth. Australia will resume from their overnight score of 112 for the loss of four wickets, after the hosts put up a huge first innings total of 423, courtesy of centuries from AB de Villiers and JP Duminy.

The South African pacers were right on the money from ball one of the Australian innings, as they rattled the visitors’ top order pretty cheaply. Comeback paceman, Wayne Parnell was star of the late show by picking up the wickets of Alex Doolan and Shaun Marsh in his very first over.

We are in for a crackerjack of a day of Test cricket. Stay with us as play starts in a few minutes. 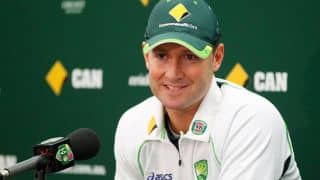