Warring South Africa and Australia will be summoned for peace talks ahead of the potentially explosive second Test starting on Friday after David Warner and Quinton de Kock were both punished for an ugly bust-up in the opening match. The ICC said that match referee Jeff Crowe will remind the teams of their responsibilities after Australian vice-captain Warner was fined 75 percent of his match fee from the Durban game and the Proteas wicketkeeper-batsman docked 25 percent.

“Mr. Crowe has convened a meeting of the captains and managers of both sides (Thursday) at St George’s Park to outline his expectations relating to player behaviour during the second Test starting on Friday,” said an ICC statement. Earlier Wednesday, South African coach Ottis Gibson called for umpires in the second Test to “do their job” and defended De Kock against allegations of provoking an altercation with Warner. Gibson also questioned what was meant in Australian assertions about not “crossing the line” with their behaviour.

Warner was cleared to play in the second Test but was fined 75 percent of his match fee and given three demerit points for an incident captured on closed circuit television as the players climbed the stairs towards the dressing rooms at the start of the tea interval on the fourth day of the first Test in Durban on Sunday. Warner, who was charged with a level two offence, will be banned if he gets one more demerit point within the next year. De Kock was charged with a lesser level one offence but contested the charge, adding further spice to the second Test. He was, however, fined 25 percent of his match fee and given one demerit point.

In response to comments by his Australian counterpart Darren Lehmann that both sides would “push the boundaries” with their on-field aggression but that they shouldn’t “cross the line”, Gibson asked how that line was defined.”There’s this thing and I have seen it recently now about the line,” said Gibson. “They are saying they didn’t cross the line, but where is the line, who sets the line, where did the line come from?”

Although both teams have confirmed that there was verbal aggression on the field, the on-field umpires did not report anything, evoking scepticism from Gibson.”If things are happening in the game and things are being said and if it’s within earshot — if the player is standing at point or wherever he is fielding, surely the umpires can hear. Maybe the umpires need to stand up and take control of the game. The match officials are there to do a job and to govern the game on the field, and off the field I guess. If they hear things on the field, they should clamp down on it.”

“It becomes unfortunate when everybody else hears stuff and the match officials say they haven’t heard anything. They are there to do a job and they must do their job.” Former West Indies player Gibson added: “I think everybody just needs to focus on cricket. Calm down and get back to cricket.” The punishment of Warner followed a 15 percent fine and one demerit point imposed on Australian spin bowler Nathan Lyon for appearing to drop the ball on AB de Villiers after the batsman was run out in Durban.

On the field on Friday, South Africa will be looking to their senior batsmen to stand up to Australia’s formidable bowling attack. With conditions likely to be similar to those in which Australia won the first Test by 118 runs, South Africa cannot afford another sub-standard batting performance if they are to keep alive their hopes of winning the four-match series. The key difference in the first Test was the contribution of the lower order batsmen, with Australia’s Mitchell Starc proving a match-winner with his fast reverse swing, which destroyed South Africa’s tail.

The St George’s Park pitch usually has the slowest and lowest bounce of South Africa’s Test grounds. Reverse swing was a feature when South Africa beat Australia by 231 runs in 2013-14. 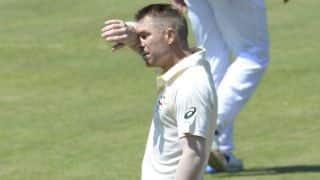 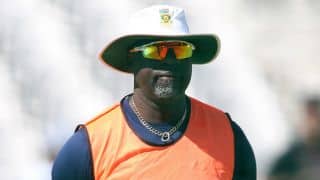