De Kock single-handedly thrashed the visitors with his thundering innings of 173 off just 11 deliveries to achieve the target of 295 with almost 14 overs to spare.

In what was touted to be an exciting opening match of the five-match One-Day International series at Centurion between two arch-rivals South Africa and Australia, Quinton de Kock single-handedly thrashed the visitors with his thundering innings of 173 off just 11 deliveries to achieve the target of 295 with almost 14 overs to spare. Winning the toss, hosts opted to bowl first in what was supposedly a batting conducive pitch. After an aggressive start from Australian openers David Warner and Aaron Finch, the middle-order batsmen which included captain Steven Smith, Mitchell Marsh, Mathew Wade and Travis Head disappointed as the visitors were left struggling at the score of 192 for the loss of six wickets.

But it the 79 runs partnership between George Bailey and John Hastings that restored the lost momentum into the Australian innings as they went into score a total of 294 in 50 overs. With the target demanding a run-rate of almost 5.50 RPO, it was very vital that the hosts got off to a flying start, just like their opponents did. Standing upright to the expectations, openers Quinton de Kock and Rilee Rossouw took off the South African innings with a flier. They together went to put an opening stand of 145 before Rossouw departed. Having formed such a strong launching pad for a big run-chase, South Africa subsequently went to win this match in a dominating manner riding on de Kock’s 173 runs off 113 deliveries. the left-handed wicket-keeper batsman also registered his best score in ODI beating his previous score of 138 against England back on 9th February earlier this year. ALSO READ: South Africa vs Australia 1st ODI: Quinton de Kock’s assaults storms hosts 6-wickets victory

In spite losing his partners at the other end, De Kock did not show any indications of slowing down as he upped his aggression with each passing over to finish with 16 fours and 11 sixes, to help his side past the target in just 37 overs. De Kock fell short of 2 runs to become the highest run-scorer against Australia, which is held by legendary South African batsman Herschelle Gibbs.

With the series opener win, the hosts will look to continue with the winning momentum in the second ODI which is to be played at Johannesburg on 2nd October, while the visitors will look to level the series and get in their winning form which they had displayed against Sri Lanka which they won easily with a 4-1 margin. 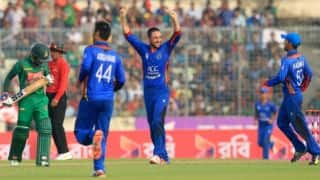