South Africa all-rounder Wayne Parnell has been ruled out of the ongoing one-day international series against Australia due to a rib injury.

Johannesburg [South Africa] (ANI): South Africa all-rounder Wayne Parnell has been ruled out of the ongoing one-day international series against Australia due to a rib injury. The 27-year-old sustained the injury during the second ODI in Johannesburg on Sunday and will require at least a month to make a full recovery, Sport24 reported. Reflecting on Parnell s injury, South Africa team manager Mohammed Moosajee said: Wayne had a high-impact landing while fielding during the second ODI on Sunday with subsequent scans confirming a rib injury. He will require two to three weeks of rest before he can resume bowling which makes him unavailable for the remainder of this series.

South Africa are leading the five-match series 2-0 and will clinch their first bilateral series win against Australia since 2008-09 if they win the third ODI at Kingsmead in Durban. Earlier, South Africa defeated Australia yet again by 142 runs at Wanderers and are sorely missing their ace bowler Mitchell Starc in these situations. South Africa have very much covered up for the absence of AB de Villiers and Hashim Amla, with Quinton de Kock s century in first One-Day International (ODI) and stand-in skipper Faf du Plessis s crucial century in the second. South Africa captain du Plessis said the obvious thing following the result, that Starc had left a huge hole in Australia s team. Starc had been rested from the tour of South Africa due to injury during his training session and had to undergo surgery. De Villiers is already affected by elbow injury since August while Amla was declared fit despite which he was kept away from the final XI on Sunday. Starc suffered a deep shin laceration after colliding with training equipment, following which he underwent surgery and received 30 stitches. However, du Plessis equally lauded South Africa s efforts as 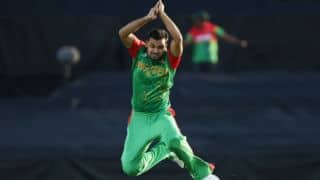