South Africa will resume Day Three of the first Test against England on 137 for 4, still trailing by 166 runs. Dean Elgar has batted beautifully so far as he is unbeaten on 67. Temba Bavuma will look to give Elgar good support at the other end. Earlier England were bowled out for 303. Dale Steyn and Morne Morkel picked up four wickets apiece to bundle England out. Nick Compton played a gritty innings but he was dismissed for a well-made 85. James Taylor scored 70 and there were 41 scored off the bat of Jonny Bairstow as well, which took England’s score past the 300-run mark. Live cricket scorecard: South Africa vs England 1st Test, Day 3 at Durban

Barring Elgar, AB de Villiers played a handy knock of 49, before he was caught behind of Stuart Broad. Broad bowled magnificently and ended the day with figures of 3 for 16. Moeen Ali was the other wicket-taker, getting rid of faf du Plessis for just two. Amla and du Plessis’ torrid time with the bat continued in this match as well. READ: Dean Elgar’s half-century brings some substance to South Africa’s innings at stumps on Day 2

Catch the live streaming of Day 3 of the first Test at Durban between South Africa and England on tensports.com, and the live telecast of the match on Ten Cricket and Ten HD.

Live streaming has become an important tool for sports fans all around the world. One can access live streaming sitting at any part of the world. All he needs is a good internet connection. But the user must be careful and must not get misdirected into wrong websites and must use his judgement and click on the right link for live streaming. 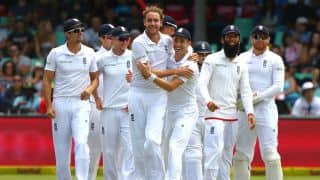