On Day 3 Hashim Amla and AB de Villiers will want to avoid South Africa from following on chasing England first innings score of 629.

South Africa began the post-tea session on a positive note as they eventually brought up their opening 50 runs within 15 overs, followed by the 50-run stand between opener Elgar and Amla, before Elgar fell for 44 to Stokes after a healthy 78-run stand. However, it was the pair of Amla and AB de Villiers that took charge and batted out till the rest of the day as they eventually brought up the 100 runs for South Africa in 29 overs, while Amla scored his 29th Test half-century in 110 balls, along with seven boundaries. They also put up they 50-run stand for the third wicket before finally getting off the field at stumps. Live Cricket Scorecard: South Africa vs England, 2nd Test at Cape Town

For England, Stokes slammed 258 and Bairstow made 150 not out before England declared on 629 for six. The pair shared a world Test record sixth-wicket partnership of 399. Stokes’ score was the highest by a number six batsman in Tests. Stokes followed up by having South African opening batsman Dean Elgar caught at point as South Africa reached 141 for two at the close, still 488 runs behind. The left-handed Stokes thrashed 30 fours and 11 sixes in a 197-ball innings. He reached his double century off 163 balls, the second fastest in Tests behind Nathan Astle’s 153-ball effort for New Zealand against England at Christchurch in 2001/02. Live Cricket Score, South Africa vs England 2015-16, 2nd Test, Day 3 at Cape Town

Live Streaming has become an extremely popular with sporting enthusiasts to catch the live broadcast of any sporting event across any platform from anywhere in the world. Viewers take immense interest in streaming of the game as it’s convenient to use on most modern devices. However, it must be noted that all streaming sites are not safe and vieweres must maintain caution and not fall trap into those illegal and fraudulant websites, who also charge the viewers for streaming online. Thus, viewers should only access streaming through the official website and bar themselves of making any kind of online payment to watch the streaming as official streaming is available for free. 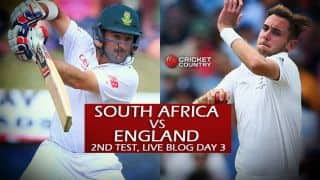