South Africa and England meet each other in the fourth and final Test of the Basil D’Oliveira Trophy 2015-16. England have already won the series winning 2 out of the 3 matches played. England won the first Test at Durban, while second Test match was a draw, will me more so remembered for Hashim Amla’s double ton and Temba Bavuma’s maiden Test ton. Second Test was also a Ben Stokes show were he hit a smashing 258 runs. Third match of the series saw AB de Villiers take over as South African captain as Hashim Amla resigned. England on the other have had champions with both ball and bat in Joe Root, Bend Stokes and Stuart Broad their main pillars of victory. South Africa will need to win the fourth Test for their beloved fans and also regains lost pride.

Catch the live streaming of Day 1 of the fourth and final Test at Centurion between South Africa and England on tensports.com, and the live telecast of the match on Ten Cricket and Ten HD.

Live Streaming is slowly but steadily catching up in terms of both requirement and demand with fans of cricket throughout the world. Live Streaming comes in handy to cricket lovers who are unable to access television to watch the cricket match and solely depend on the internet and live streaming to watch the sports they love. Many websites and portals show Live Streaming on their websites, but these are usually not entirely reliable. Some such pages may take the users to some nefarious pages and frustrate the user. Live Streaming can be accessed even on hand-held devices where one can follow live updates, and even ball-by-ball commentary of the latest score from any part of the world via live streaming. 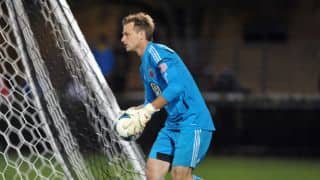 US goalkeeper Bill Hamid out for 4-6 months owing to knee injury; Andrew Dysktra to replace