Guptill remained unbeaten as NZ chased the 205-run target down with 35 balls to spare.

Martin Guptill hit an unbeaten century as New Zealand cruised to an eight-wicket win in the second One-Day International (ODI) against South Africa at Senwes Park on Sunday. Guptill made 103 not out, reaching his ninth one-day international with the winning boundary as New Zealand won with 35 balls to spare after bowling out South Africa for 204. The win squared the three-match series, with the decider to be played in Durban on Wednesday. Doug Bracewell led a disciplined bowling performance as the South African batsmen failed to come to terms with a slow pitch.

Bracewell, playing in his first ODI in more than two years, took a career-best three for 31 with his accurate medium-pacers. Guptill and Tom Latham made the victory target look easy with an opening partnership of 126, a record one-day first wicket stand for New Zealand against South Africa. The previous record of 114 had been set by Mark Greatbatch and Rod Latham — Tom’s father — in Auckland during the 1992 ICC Cricket World Cup.

Latham made an impressive 64 off 81 balls before he was caught at deep square leg off leg-spinner Imran Tahir. Guptill, who was dropped three times in making his first 40 runs, went on to see his team to victory in a 134-ball innings. He hit nine fours and three sixes. New Zealand captain Kane Williamson said his bowlers had to adapt their plans after realising how slow the pitch was.

“We knew we had to play above ourselves to get back in the series. The way the guys executed was fantastic -– a great effort with the ball, then the way the openers batted.”

Bracewell took the next two wickets in a spell of two for 18 in six overs, with Rilee Rossouw (39) and David Miller (5) both falling to catches when they mistimed drives on a slow pitch.

South Africa slumped to 107 for five in the 24th over when captain AB de Villiers also fell to a mistimed shot, chipping Elliott to short midwicket after making 31. Behardien and Vernon Philander put on 54 for the seventh wicket before the innings subsided, with the last three batsmen run out.

“We didn’t score enough runs,” said De Villiers. “There’s a lot to play for in Durban.” 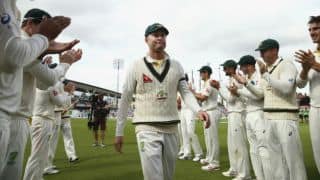 Michael Clarke: I'm blessed to have played for Australia 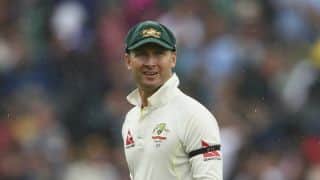