The first Test ended in a draw with no play on third, fourth and fifth day due to wet outfield.

Hosts South Africa are all set to face New Zealand in the second Test match of the series. Catch the live cricket streaming of the match on tensports.com, while the live telecast of the match is available on Ten 2. Also enjoy the live streaming of the match on your mobile through Ditto TV app. The first Test remained drawn with no play on third, fourth and fifth day. The Kingsmead outfield played villain as the match could not be held due to the wetness despite no rain afterwards and the officials were highly criticised for the poor maintenance and condition. FULL CRICKET SCORECARD: South Africa vs New Zealand, 2nd Test at Centurion

Earlier, New Zealand bowlers had bundled South Africa for 263 in the first innings. It was almost a no show by the South Africa batsmen except Hashim Amla who scored a 53. Amla found some support from Temba Bavuma who came out to bat at No. 6 and scored 46. Quinton de Kock at No. 7 added 33 runs while Kagiso Rabada remained unbeaten at 32. Neil Wagner and Tim Southee remained the highest wicket-takers for New Zealand with 3 wickets each while Mitchell Santner took 2 wickets.

Martin Guptill and Tom Latham opened New Zealand’s inning but could not do much as both were soon sent back by South Africa bowling lead Dale Steyn. As Kane Williamson and Ross Taylor looked to settle things for the hosts and take things forward, rain took over. The match later on could not be resumed and ended in a draw. 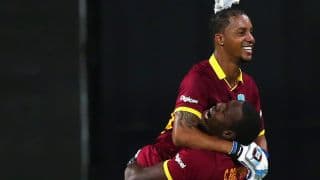