For the first time in his 23-Test career for New Zealand, Neil Wagner had his whole family and many of his childhood friends watching him during the first day of the second Test against South Africa at SuperSport Park on Saturday. “It was a special moment for me,” said the fast bowler, who grew up in nearby Pretoria. Wagner is part of what is becoming an increasingly common phenomenon, a born-and-bred South African who has moved to another country and represented it in sport. He was born in Pretoria and went to Afrikaans Boys’ High, the same school as South African stars AB de Villiers and Faf du Plessis. FULL CRICKET SCORECARD: South Africa vs New Zealand, 2nd Test at Centurion

“I was two years behind them. I went to the same primary school as Faf and we played a lot of backyard cricket together.” Wagner, 30, started his first-class career for the Northerns amateur side before moving to New Zealand at the age of 21. “I have loved every bit of it. I live in Dunedin today and that has played a big part of who I am and how I have developed as a cricketer,” he said. But it was at Centurion that he developed his passion for cricket, which made playing there such a special moment.

“I had a lot of goosebumps when I walked out,” he said. “It’s the first time in my life that I had my whole family and a lot of the friends I grew up with sitting next to the field and watching a Test match. I remember sitting on that bank and watching Allan Donald and Shaun Pollock and those guys, growing up and falling in love with this game. Walking out there today to represent the Black Caps in a Test match was an amazing feeling. I loved every moment of it.”

He said he stayed in touch with his old school and his friends from his younger days and looked forward to a day off after the Test to spend some time with them. His home language was Afrikaans and he still speaks the language when he is with his family. He took questions in Afrikaans at a press conference but answered in English.

“It’s just respect for the place where I live now. It’s an English-speaking country. I’m a fully converted Kiwi now.”

When he lived in South Africa his surname was pronounced in the guttural Afrikaans way ‘Vargnuh’ but since he started playing for New Zealand it has been pronounced phonetically, with the ‘Wag’ as in a dog with its tail. Now he prefers that.

“I’m in New Zealand now, everyone calls me that. It’s my adopted country and I’m very happy with that. My nickname is Wags. I’m not too fussed about it.”

South Africa’s top four batsmen all made half-centuries as New Zealand’s decision to bowl first failed to pay off on the first day of the series-deciding second Test. South Africa were 283 for three at the end of a day when New Zealand were on the wrong end of no fewer than five leg before wicket decisions, while seam bowler Doug Bracewell limped off late in the day with what appeared to be a hamstring injury. 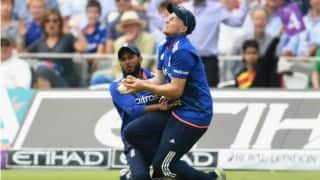