Centurion: Duanne Olivier claimed a maiden Test five-wicket haul as Pakistan were bowled out for 181 on the first day of the first Test against South Africa at SuperSport Park on Wednesday.

Babar Azam made a defiant 71 off 79 balls to give the Pakistan innings some respectability after their batsmen were subjected to an onslaught of fast, short-pitched bowling.

Steyn took the second wicket of the day to claim the South African record but had no further success. He was punished for 40 runs in four overs in his third spell of the day as Azam went on the attack while batting with the tail. Azam hit ten of his 15 fours off Steyn, who finished with one for 66.

Olivier, who gained his sixth Test cap following injuries to Vernon Philander and Lungi Ngidi, was consistently hostile, especially in a seven-over spell after lunch when he ripped through Pakistan’s middle order, taking three for 17. He returned to take the last wicket shortly before the scheduled tea break.

Steyn claimed his 422nd Test wicket, going past previous record-holder Shaun Pollock, when Fakhar Zaman edged him to third slip for 12, sparking exuberant celebrations from his team-mates. Kagiso Rabada lifted his new-ball partner onto his shoulders as other players rushed in to congratulate him. 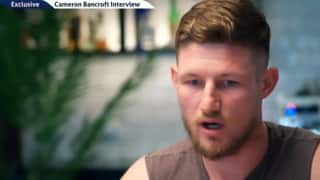 I had to learn to forgive myself first before I could forgive other people: Full transcript of Cameron Bancroft’s latest interview with Adam Gilchrist