Johannesburg: A century by Quinton de Kock and a double strike by Dale Steyn kept South Africa on course to complete a series clean sweep on the third day of the third and final Test against Pakistan at the Wanderers Stadium on Sunday. Set to make a daunting 381 to win, Pakistan were 153 for three at the close, needing another 228 runs. (3rd Test, South Africa vs Pakistan: FULL SCORECARD)

De Kock made an imperious 129, equalling his highest Test score, before South Africa were bowled out for 303.

Imam-ul-Haq and Shan Masood got Pakistan off to their best start of the series, putting on 67 for the first wicket. Both batsmen looked comfortable on a pitch which played easier on Sunday than the first two days.

But a change of ends brought immediate results for Steyn. Bowling from the southern, Corlett Drive end for the first time in the match, he had Imam caught behind for 35 with a superb delivery which moved away from the batsman just enough to find the edge.

Four overs later Steyn claimed the wicket of Masood after umpire Joel Wilson originally gave him not out. A successful review by South Africa showed a faint inside edge onto Masood s thigh pad before the ball carried through to wicketkeeper De Kock.

Duanne Olivier dismissed Azhar Ali for the fourth time in the series when the batsman gloved a bouncer to De Kock.

Asad Shafiq (48 not out) and Babar Azam (17 not out) saw Pakistan through to the close with an unbeaten stand of 49.

De Kock and Hashim Amla were mainly responsible for South Africa posting a target likely to be beyond Pakistan s reach. They came together on Saturday when their side were 93 for five, at which stage their lead was a modest 170.

While Amla patiently compiled an innings of 71 off 144 balls, the left-handed De Kock played fluently as the pair put on 102 for the sixth wicket. De Kock also shared an eighth wicket stand of 79 with Kagiso Rabada.

De Kock reached his fifty off 49 balls and his fourth Test century off 121 deliveries. He was finally caught in the deep, trying for a second successive six off leg-spinner Shadab Khan, after facing 138 balls and hitting 18 fours and a six.

Captain Sarfraz Ahmed set a record for a Pakistan wicketkeeper by taking five catches in each innings. His total of ten dismissals in the match was one better than the record previously shared by Rashid Latif and Kamran Akmal.

Pakistan only made one total over 200 in their first five innings in the series and had not batted for longer than 70.4 overs. 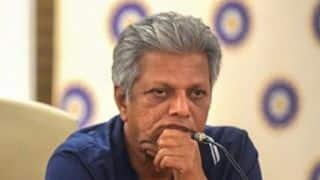