At the end of the 31st over during the Sri Lanka run-chase, Miller decided to take over wicket-keeping responsibilities, but without the pads.

The business end of the second one-day international between South Africa and Sri Lanka on Wednesday witnessed an interesting incident when David Miller donned the wicket-keeper s gloves after Quinton de Kock went off the field.

At the end of the 31st over, De Kock, who top scored with a sublime 94 after the hosts were asked to bat, trudged off the field and did not return. Sri Lanka were 135 for the loss of 9 wickets, with a steep target of 252 staring at them. Miller decided to take over wicket-keeping responsibilities, but without the pads.

Legspiner Imran Tahir was handed the ball for the 32nd over. In the second delivery, Sri Lanka captain Lasith Malinga chipped it towards long-on for a single that brought Vishwa Fernando to the crease. In the fourth delivery, Tahir tossed it up and gave it several revs in the air. Fernando went for the slog, but ended up missing the ball. Miller seemed to be in no discomfort while collecting the ball and he also tried to dislodge the bails in a flash. (ALSO READ: Players have to value opportunities, they won’t come every day: Lasith Malinga)

South Africa won the match by a massive 113 runs to take a 2-0 lead in the five-match series. QDK was awarded the Man of the Match for his 94 after the tourists were bundled out for just 138 runs in 32.2 overs.

Asked about Miller s keeping, De Kock said at the post-match presentation. I am working on him (Miller) and will make him a better ‘keeper one day, he said. 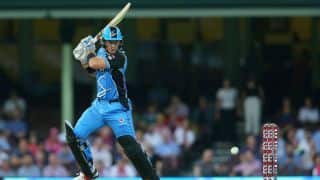