South Africa captain Faf du Plessis called the series loss against Sri Lanka one of the most "disappointing moments" endured by the team.

South Africa captain Faf du Plessis called the series loss against Sri Lanka one of the most “disappointing moments” endured by the team and lamented the underperformance of his batsmen. (READ: Karunaratne savours Sri Lanka s historic triumph)

South Africa were bowled out for 235 and 259 in Durban and 222 and 128 in the two innings in Port Elizabeth. The failure of South Africa’s batsmen in the second innings in particular was what titled the match in Sri Lanka’s favour and the visitors chased down the 197-run target to win the match by eight wickets and blank the home team 2-0.

“Very disappointing and it’s probably down there with the most disappointing moments as a team. You don’t want to be a losing series at home. We obviously didn’t play well, but to come to our backyard and beat us 2-0 means you’ve done something right; so good luck to them,” du Plessis said.

“We were pretty poor with the bat throughout the series and I thought both teams under performed with the bat. The pitches were conducive for batting and on this wicket, we should have scored a lot more runs. No fingers should be pointed at the wicket but they bowled well and the disappointment lies within the team. We have some great batters in our side and 99-percent of our dismissals were soft judgement errors and that’s only a finger pointing back at ourselves.”

Sri Lanka’s series win was one of the biggest upsets in recent cricket history. South Africa had won their previous seven series at home and had won 16 out of 19 home Tests, with only two defeats, before losing in Durban. A total of 31 wickets fell on the first two days of the Port Elizabeth Test but du Plessis conceded that batting in the second innings wasn’t as difficult as the scoreboard reflects. This marks the end of a long season for South Africa and they now proceed and begin preparations for the big one the World Cup.

“It’s absolutely mind blowing (31 wickets on the first two days) and I was thinking the exact same thing on the field. Batting out there yesterday felt like a very good wicket, and despite there being a bit of nip, it wasn’t very tough. There was some bad batting from both sides for the first two days and they showed today that if you applied yourselves, you could make it look easy,” du Plessis said.

“It is a massive dent; we were looking good until this Test series, but we went down as a team in these last two matches. We have prepared the same way as we usually do, we didn’t take them for granted. It has been a long season; the guys have toiled hard and mentally it has been tough which is probably why we’ve been off the boil.”

Sri Lanka play South African Invitation XI before the first of the five ODIs takes place in Johannesburg next Sunday, followed by three T20Is. The series will be both teams’ final pitstop before the World Cup starting May 30 in England. Du Plessis explained it was important to move on from the defeat and align South Africa’ focus for the World Cup.

“We have a big five months coming up and for us we need to ensure that our preparations aren’t taken for granted. We can try and control the way we prepare against an opposition. They will now be high on confidence for the one-day series, but our guys should be really motivated for what lies ahead. It’s just one series and then the World Cup. We need to ensure along with the coach that there are no small weaknesses creeping into the dressing room,” said du Plessis. 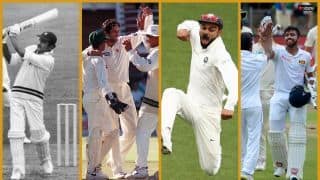