The third and the final Test at the Wanderers in Johannesburg will see Hashim Amla become the eighth South African to enter the 100-Test club.

The Cape Town win helped South Africa pocket the series against a struggling Sri Lanka side but Kyle Abbott’s premature exit from Test cricket blotted the occasion and opened a Pandora’s Box. There were emotional scenes at Newlands. Soon, South Africa also lost two of their limited-overs stars Rilee Rossouw and David Wiese to Kolpak signings. Captain Faf du Plessis lamented but stressed on the importance to look ahead focusing on the pride to play for the nation. Amidst the Kolpak hullaballoo and buzz over ‘racial’ quota influencing selection, South Africa look ahead to Hashim Amla, the stalwart who readies himself for this 100th Test.

“I am going to make a big call and say Hash (Amla) is probably going to be the last guy that plays 100 Tests for South Africa because of the way that the game is changing,” du Plessis said ahead of the final Test. The quote is about Amla’s greatness but the subtle suggestions on the ongoing problems are tough to be ignored. The third and the final Test at the Wanderers in Johannesburg will see Amla become the eighth South African to enter the 100-Test club. A player of sheer class, who has conquered every condition, Amla is currently battling form.

In the last one and half years, Amla has been a shadow of his pristine past, averaging just over 33. Amla has scored 97 runs at 24.25 in the ongoing series and come his 100th Test, he will seek a change in the pattern.

The supreme pacer of this generation Dale Steyn admits that Amla is one of the two guys whom he does not enjoy bowling to, in the nets. The other being AB de Villiers.

Both de Villiers and Steyn are nursing injuries and would not be a part of Amla’s momentous moment. The spotlight will remain on Amla and South African side will look forward to present him ‘a win’ that will lead to a 3-0 whitewash.

Sri Lanka’s perspective: As the chief selector Sanath Jayasuriya remarked that batting has let them down. The team is still in its rebuilding stage and the youngsters and the experienced ones have not stepped up to the occasion yet. The surface at Wanderers is expected to have plenty of bounce and while South African pacers can cherish that, to Sri Lanka’s advantage, it would not move around as much.

The seam movement has been the matter of concern for Sri Lanka along with shot selection. Alongside the experience of Angelo Mathews and Dinesh Chandimal, Sri Lanka will hope for the likes of Dhananjaya de Silva and Kusal Mendis to fire.

Their bowling, which is largely dependent on Rangana Herath, has fresh boost in the likes of Suranga Lakmal and Lahiru Kumara. With bounce on offer, Sri Lankan pacer will like to take a leaf out of Stuart Broad’s book, the man who dismantled the Proteas at the same venue last year.

The bowlers have managed to restrict South Africa but if their batting continues to falter, a whitewash looms for the visitors.

South Africa’s perspective: “I will keep grass on the pitch and there will be bounce and carry, but there won’t be as much in the wicket as there was for Broad. This will be a wicket that will offer run-scoring opportunities,” said Bethuel Buthlezi, the groundsman, who prepared the pitch under the tent due to weather conditions.

The opening has been pretty solid for South Africa and barring Amla and Temba Bavuma the middle-order has looked good.

South Africans have not hesitated playing four pacers at the Wanderers and with Jacques Kallis around, things were easier. Abbott’s absence leaves a whole, which is likely to be filled by Wayne Parnell, who recently claimed a six-for for Cape Cobras.

Left-arm spinner Keshav Maharaj has done well but with spin usually being ineffective and a part-timer in JP Duminy in ranks, South Africa may be temped to go in with the 24-year-old pacer Dwayne Oliver.

The Free State pacer has 224 wickets at an impressive 21.38 from 57 First-Class matches. It is likely he will be handed the maiden cap. Oliver is a wicket-taking bowler who does rely a lot on conditions and has the ability to get the ball to reverse. 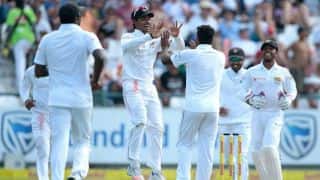