The other two men on the list are Alec Stewart and Inzamam-ul-Haq. Greenidge is the only one to score hundreds in both his 100th Test and 100th ODI. A special mention must be made of Mohammad Azharuddin, who had scored hundreds in his first three Tests as well as in his 99th. Unfortunately, that was where his career had ended.

Amla is also nearing the 8,000-run mark in Tests (only Jacques Kallis, Smith and AB de Villiers have more). In the ongoing match, Amla and JP Duminy joined hands when South Africa were in a spot f bother at 45 for 2 after openers. Stephen Cook and Dean Elgar were sent back for low scores in consecutive overs. Duminy has already scored his sixth Test ton and the duo have added well over 200 runs for the third wicket and look to carry on in such a similar fashion till stumps.

Below is the list of players, who scored a century in their 100th Test:

Amla also happens to be South Africa s only triple-centurion, which coincidentally came in Smith s 100th Test. He also has four double-hundreds. Of South Africans, only Smith (5) as more, while Kallis (45) and Smith (27) are the only South Africans with more hundreds than Amla (26). 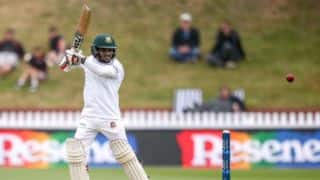