Hashim Amla, playing his 100th Test along with JP Duminy stitched together a 292-run stand for the third wicket.

South Africa ended Day One at a commanding position of 228 for 3 in the third Test against Sri Lanka at Johannesburg. South Africa were in a spot of bother at 45 for 2 after they lost their openers Stephen Cook and Dean Elgar early. But Hashim Amla, playing his 100th Test along with JP Duminy stitched together a 292-run stand for the third wicket, that has put South Africa in the driver s seat. The live cricket telecast will be available on Ten 3 and Ten 1 HD. Also, the fans can enjoy the live streaming of the match on their smartphones via Ozee.com and Ditto TV app.

Duminy was dismissed by fast bowler Lahiru Kumara for a well made 155, at the penultimate over of the day. But Amla carried on and remained unbeaten on 125. He became only the eighth player to score a century on his 100th Test, but more importantly, it ended a lean patch for him. Day Two will resume with Amla and debutant Duanne Olivier the nightwatchman at the crease. Sri Lanka had started the day well after South Africa had won the toss and elected to bat first. Sri Lanka sent both the Proteas openers back in the hut before the lunch interval.

South Africa have already won the series going into this match. They won the first Test at Port Elizabeth by 206 runs and followed that up with a 282-run in the second Test at Cape Town. South Africa and Sri Lanka will play three T20 Internationals (T20I) and five One-Day Internationals (ODI) after the conclusion of this Test. 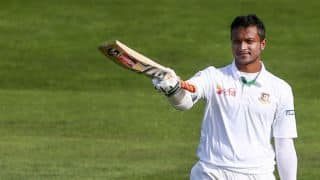