Jerome Taylor has picked two wickets with the new ball.

Jason Holder‘s first match as ODI captain has started with a bang. Holder and Jerome Taylor sharing the new ball, caused a lot of trouble for the South African batsmen and Taylor finally got the wicket of Rilee Rossouw. Rossouw’s poor run seems unrelenting as he got out for a duck. Soon after that Faf du Plessis went for a duck too falling prey to the same bowler.

South Africa were four for one after the fall of the first wicket and were then reduced to 16 for two. Hashim Amla is the batsman at the other end and AB de Villiers has come out to join him. Given South Africa’s strong batting line-up they don’t have much reason to worry just as yet. South Africa won the toss and elected to bat first, but the bowlers have had the advantage in the early overs. 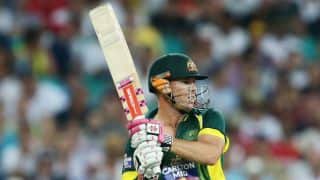