AB de Villiers has surpassed the 150-run mark on Day two of the first Test against West Indies at Centurion. The Proteas dominated proceedings on Day one on the back of centuries from their two best batsmen; Hashim Amla and AB de Villiers. The duo came out to bat an hour before lunch on Day and have added a mammoth 300 runs together since. This is the highest fourth wicket partnership for South Africa. problems galore for the visitors as they lost the services of their best bowler on show- Kemar Roach due to injury in the final session. The West Indies have taken the second new ball this morning. It is a final throw of the dice on part of the visitors. 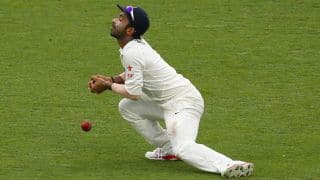