Stiaan Van Zyl scored a maiden Test match half century on debut against the West Indies in the first Test at Centurion. Van Zyl batted nervously to begin with but had the rub of the green as West Indies dropped a regulation chance early in his innings. He grew increasingly assured as his innings progressed. Van Zyl along with Amla added 84 runs for the fifth wicket as South Africa consolidated their position further, going into lunch at 449 for 4

Earlier Hashim Amla and AB de Villiers brought up their respective 150s before de Villiers was dismissed against the run of play. The duo shared a marathon 308-run stand that began an hour before lunch on Day one. 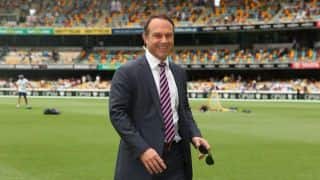