Dale Steyn got his first wicket for the match in the first Test against the West Indies on Day 4 at Centurion. Steyn got rid of a well set Leon Johnson, who departed for 39. In two successive innings Johnson’s flattered to deceive. Steyn meanwhile was up and running after recovering from the groin injury he had sustained during the first Innings on Day-3.

West Indies following on were 275 runs behind to begin Day-4. The onus is once again on the likes of Marlon Samuels and Shivnarine Chanderpaul to rescue their stuttering innings. South Africa now require just six wickets to take a one nil lead in the three match Test series. Pakistan vs New Zealand 2014, 5th ODI at Abu Dhabi: Marks out of ten for the hosts 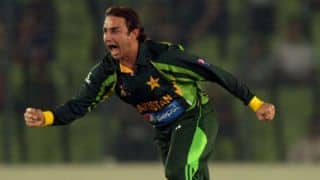