West Indies were on the mark in the first over of the match as Sheldon Cottrel conceded only a single run.

South Africa managed to reached a score of 53 for no loss after the first five overs of play in the third T20I played against West Indies at Durban on Wednesday.

Cottrell who came back to bowl the the third over bowled disciplined lines and only conceded four runs. But South Africa went blitzkrieg post the third over as the next two overs conceded 32 runs. 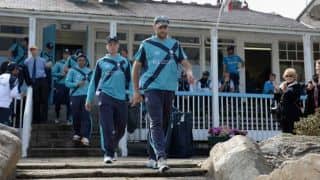