For South Africa, the bright point of the Port Elizabeth ODI was the innings of David Miller.

South Africa will face West Indies in the fifth One-Day International (ODI) at Centurion on Wednesday. South Africa have already won the series by a 3-1 margin, so this encounter will not add much to the series result, but it will one last testing ground for both teams ahead of the ICC World Cup 2015.

For South Africa, the bright point of the Port Elizabeth ODI was the innings of David Miller. South Africa were waiting for some runs from their middle order, and Miller timed it beautifully with an innings of 130 from 133 balls. Faf du Plessis will be looking to score at least 53 more runs and reach the 2,000-run landmark. Dale Steyn, who was out for two ODIs, is likely to miss the last ODI too, while AB de Villiers could be rested this time. Hashim Amla is likely to make a return after he was rested from the last ODI. It would be interesting to see if South Africa play Quinton de Kock, who is still recovering from an injury.

West Indian skipper Jason Holder led from the front in the last game, taking four crucial wickets. Marlon Samuels and Andre Russell complemented things for the Caribbeans with inspiring performances with the bat. The last-over win in the last game has raised the bar for the West Indies, has reminded all and sundry of their capability to upset any team. If the top-order gets runs for them, they can truly be a tough side to beat. They have match-winning players packed in their unit, but team work serves them better, like it did the last time around. 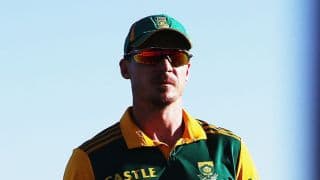