West Indies reached 100 in the eighth over.

Chris Gayle hammered a 20-ball fifty in the second Twenty20 International (T20I) between South Africa and West Indies at Johannesburg. Earlier, Marchant de Lange dismissed Dwayne Smith early, getting him out LBW for 17. Faf du Plessis scored an outstanding 46-ball 100. Justin Ontong was out for 19. David Miller scored a breezy 26-ball 47 but was was run out by some excellent footwork by Andre Russell. Du Plessis hammered a quickfire fifty. In partnership with Miller, du Plessis put the West Indian bowling to the sword after a couple of early wickets. 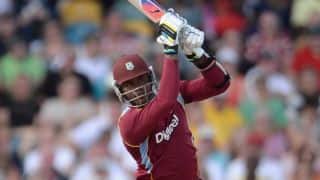