Despite missing out on the ODI squad, Bravo and Pollard have been named in the T20 squad.

All-rounder Darren Sammy has replaced Kemar Roach in the West Indies’ 15-member One-Day International (ODI) squad to face South Africa next month, in another twist in the ongoing selection saga.

The West Indies Cricket Board (WICB) announced the move Wednesday, even as allegations of victimisation regarding Sammy and fellow all-rounders Dwayne Bravo and Kieron Pollard, continued to swirl around the region, reports CMC.

Sammy, Bravo and Pollard were all left out of the initial 14-man squad announced last Saturday, prompting the players’ attorney Ralph Thorne to accuse the WICB of victimisation, stemming from their roles in the abandoned tour of India last October.

“It seems to me to be a mild form of ruthlessness that has been visited on these three players, because it really disqualifies them from any meaningful opportunity to get into the World Cup squad next year.”

However, with Roach ruled out of the Test series after failing to recover from an ankle injury sustained on the opening day of the first Test in Centurion, selectors have turned to Sammy again.

The 31-year-old, sacked as captain last year in favour of Bravo, has played 115 ODIs but boasts a modest record. He averages of 23 with the bat and 44 with the ball but can be a powerful lower-order batsman and a steady medium pacer.

He joins a unit led by 23-year-old fast bowler Jason Holder who was announced to replace Bravo as captain, in a shock move by the Clive Lloyd-led selection panel.

Despite missing out on the ODI squad, Bravo and Pollard have been named in the T20 squad for the three-match series against South Africa which precedes the ODI tour.

The T20 series runs from Jan 9-14 with the five-match ODI tour bowling off two days later in Durban. 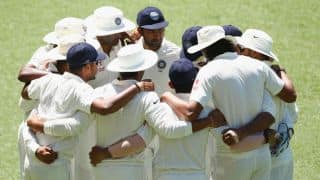