South Africa take on the West Indies in the second Twenty20 International (T20I) at Johannesburg on Sunday. After the hosts were victorious in the Test series that preceded, the visitors bounced back by wining the opening T20I at Newlands, Cape Town, after a characteristic Chris Gayle special. The live streaming of the match can be found below.

As reported by AFP, Gayle blasted 77 off 31 balls as the West Indies beat South Africa by four wickets in the first Twenty20 international at Newlands on Friday. The big left-hander thrashed eight sixes and five fours in a brutal assault on the South African bowlers. His innings included an extraordinary sequence during which he hit 52 runs off 11 balls — five sixes, five fours and a two. After making only one run off the first six balls he faced, he reached his half-century off 17 balls.

Only India’s Yuvraj Singh, who reached his half-century off 12 balls against England in Durban during the 2007 World Twenty20, has reached 50 off fewer deliveries. “It’s a captain’s nightmare,” admitted South African skipper Faf du Plessis. “I thought we posted a really good total.”

West Indian captain Darren Sammy said victory helped heal some of the wounds caused by South Africa’s comfortable 2-0 win in the preceding three-match Test series. “We were determined to make up for the Test series,” said Sammy of Friday’s winning team which featured only four of the Test side.

Catch live scorecard of the match 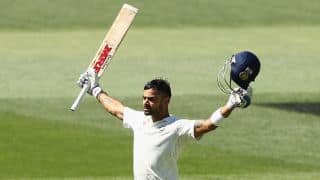