Catch all the live action on Ten Cricket and Ten HD.

West Indies face off against South Africa in the second of the three-match Test series at St. George’s Park in Port Elizabeth on Monday as Day 4 kicks off. West Indies are in control so far after a solid bowling performance and are batting good as well.

West Indies started off on a good note as openers Devon Smith and Kraigg Brathwaite brought up the opening 50-runs stand, but Smith was dismissed the very moment off Morne Morkel for 22 and soon to follow him in the next ball from the same man was Leon Johnson dismissed for a golden duck.

The post tea session saw a good comeback from the West Indies batsmen as Brathwaite and Marlon Samuels continued to bat brilliantly and brought up the 50-run stand for the third wicket along with their respective half-centuries.

Catch all the live action on Ten Cricket and Ten HD. Also catch the live streaming of the match on the go by just logging on to tensports.com or here itself. 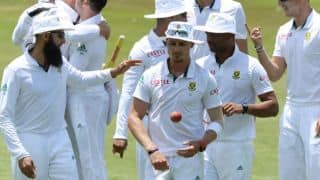