Temba Bavuma makes his way in while AB de Villiers continues to bat on 10.

South African batsman, Hashim Amla was dismissed for 33 in the second of the three-match Test series at St. George’s Park in Port Elizabeth on Sunday. He was dismissed by Jason Holder who made him getting trapped leg-before while South Africa’s score read 300 for the loss of four as Temba Bavuma makes his way in while AB de Villiers continues to bat on 10.

Earlier, West Indies had won the toss and elected to field first on Friday. South Africa already lead the three-match series by 1-0 after West slumped to a defeat in the first Test at Centurion by an innings and 220 runs. 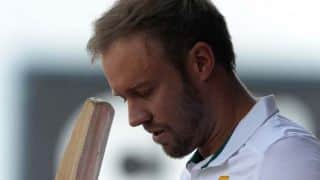