Left-arm seamer Kenroy Peters or fast bowler Miguel Cummins could be called up by the West Indies to replace fellow pacer Kemar Roach who will miss the Boxing Day Test against South Africa through injury.

Cummins is believed to be the frontrunner to replace Roach who limped out of the first Test here on Wednesday’s opening day after injuring his ankle, and played no further role in the contest. The West Indies crashed to an innings and 220-run defeat on the penultimate day here Saturday, reports CMC.

But the 32-year-old Kenroy Peters is under serious consideration by selectors, especially after a superb first class campaign last season, when he finished as the leading wicket-taker with 40 scalps at an average of 12.75, earlier this year.

The Vincentian, who is yet to play for the West Indies, has also made a bright start to the new West Indies Cricket Board (WICB) Professional Cricket League, with 13 wickets in four outings for Windward Islands Volcanoes.

However, at 24, the Barbadian is seen as one for the future, reflected in his inclusion on recent West Indies A tours. Meanwhile, Roach remains bothered by the injury, even though MRI scans revealed no major damage, experiencing severe discomfort whenever weight was placed on the ankle.

Roach had been the most impressive of the Windies attack with two for 52 before he picked up the injury while running up to bowl in the final session of the opening day. A decision will be made shortly on his availability for the remainder of the series. 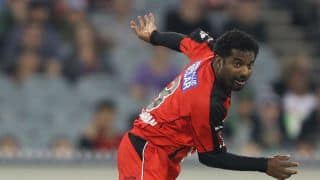