Faf du Plessis was the last man to be dismissed for 103 as he scored his fourth Test century.

Rain is playing a spoil sports as it has stopped proceedings between South Africa and West Indies in the second of the three-match Test series at St. George’s Park in Port Elizabeth on Saturday. Currently South Africa are 289 for the loss of three wickets in 94 overs.

Faf du Plessis was the last man to be dismissed for 103 as he scored his fourth Test century in the first ball of the day with a boundary. Currently, it’s Hashim Amla and AB de Villiers batting on 23 and nine respectively.

Earlier, West Indies won the toss and invited South Africa to bat first. South Africa already lead the three-match series by 1-0 after West slumped to a defeat in the first Test at Centurion by an innings and 220 runs. 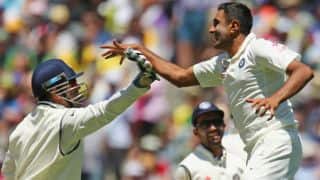 MS Dhoni breaks record for most stumpings in international cricket

Sunil Gavaskar regrets his act of dissent at Melbourne in 1981