Rilee Rossouw was out for a nine-ball 15.

Rilee Rossouw was out for a nine-ball 15 in the second Twenty20 International (T20I) between South Africa and West Indies at Johannesburg. Rossouw was out to Jason Holder, getting caught behind by Denesh Ramdin. Earlier, Morne van Wyk was out in the first over. He was dismissed hitting a short ball from Sulieman Benn straight to Kieron Pollard at point. After losing the first match, South Africa were in a must-win position to draw the series.

West Indies won the toss and elected to field first against South Africa in the second T20I of the series. The visitors went in with an unchanged side, while Justin Ontong and Aaron Phangiso came in at the cost of Kagiso Rabada and Reeza Hendricks for South Africa. 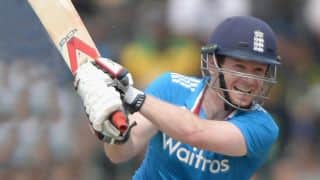 Eoin Morgan: My captaincy will be different from Alaistar Cook's