All three players were named Saturday in the 15-man squad to contest the five-match series in South Africa starting next month, reports CMC.

In a surprise move, the WICB named rookie fast bowler Jason Holder to lead the squad, axing the experienced Dwayne Bravo after just 19 months in charge and also dropping him from the squad. Big-hitter Kieron Pollard has also been dropped from the one-day squad. He averages 25 from 91 matches.

“We have decided to introduce a few new players to the international stage and once they deliver the performances we are looking for we believe we have the right kind of foundation to take the game forward,” chief selector Clive Lloyd said.

“We are in a situation where we want to go up the ladder in all three formats and aim to form teams which will take us there.”

The powerful lower order batsman, can produce explosive spells with his lively pace, and is regarded as a future captain.  Deonarine, also called up Saturday to replace the injured Assad Fudadin in the Test squad in South Africa, is back in the ODI set-up a year after playing the last of his 29 ODIs.

Fast bowler Kemar Roach’s ankle injury has ruled him out of the one-day line-up, with the WICB set to name his replacement shortly.  Former captain Sammy has also been dropped from the ODI squad but remains in charge of the Twenty20 unit which was also announced Saturday.

Notably missing are leg-spinner Samuel Badree and left-arm seamer Krishmar Santokie, both of whom are injured. Champion off-spinner Sunil Narine, under international scrutiny over his action, has not been picked in either squad. The West Indies face South Africa in three Twenty20s next month, prior to the start of the ODI series. 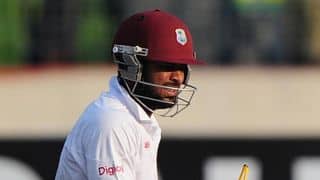 Hanif Mohammad: 12 things you should know about the original Little Master