David Miller got to his maiden One-Day International (ODI) century of just 122 balls.

David Miller played an extremely mature innings in a pressure situation and in the process got to his maiden One-Day International (ODI) century of just 122 balls. He walked out with South Africa at 32 for three but at no point looked uncomfortable even as wickets continued to fall at the other end. He enjoyed support from JP Duminy at one point putting up a 90-run partnership with him. 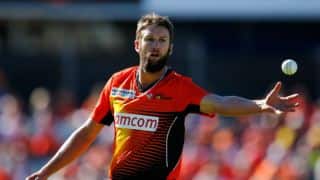