Darren Sammy made the break through with JP Duminy on 43.

After snatching early wickets and pressurizing South Africa, West Indies let the partnership between JP Duminy and David Miller get to 90 runs when Duminy finally fell for 43 off the bowling of Darren Sammy. Farhaan Behardien has now joined a well set Miller and both are capable of severe acceleration. 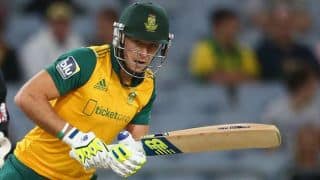