South Africa have reached a score of 100 in the 22nd Over, but with the loss of four wickets.

South Africa have reached a score of 100 in the 22nd Over against West Indies in the 4th ODI at Port Elizabeth, but with the loss of four wickets. Rilee Rossouw, Morne Van Wyk, AB de Villiers and Faf du Plessis are back in the pavillion. Sheldon Cottrell, in a fierce spell of opening bowling, picked the wickets of both openers cheaply. Skipper, Jason Holder got one wicket while Andre Russell got the wicket of de Villiers. David Miller and JP Duminy are at the crease attempting to steady the ship. 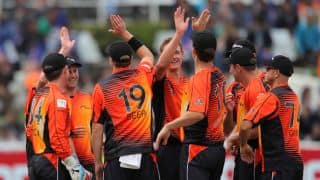 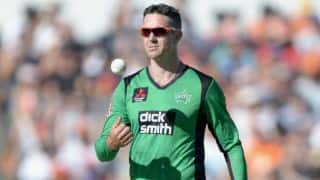