West Indies are headed towards another humiliating collapse it appears as they have lost four wickets for less than fifty runs in pursuit of South Africa‘s 262 at Port Elizabeth in the fourth ODI of the series. AB de Villiers, in a athetic effort in the field got Leon Johnson run-out, while Farhaan Behardien trapped Denesh Ramdin lbw for just three runs Piloo Reporter: Umpiring was fun for me 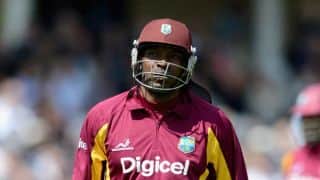