South Africa will take on West Indies in the third ODI of the five-match series at East London.

South Africa will take on West Indies in the third One-Day International (ODI) of the five-match series at East London following the 148-run mauling of the West Indians at Johannesburg. West Indies have put up a poor show in the series so far and even lost the first ODI by a margin of 61 runs by D/L method in a rain-affected match.

South Africa will look to seal the series by winning the match today. They no reason to believe that they won’t be able to do that. They have been in dominating form; their bowlers have fired and so have the batsmen under the wings of AB de Villiers. De Villiers scored a whirlwind 149 in the previous match off just 44 deliveries.

On way, he broke a few records. He got to his hundred in 31 deliveries, bettering the previous record to fastest hundred by five deliveries. He smashed 16 sixes — the joint highest in an innings along with Rohit Sharma. De Villiers’ stay at the crease made West Indies nightmare in the match even scarier.

Openers, Hashim Amla and Rilee Rossouw had both scored hundreds prior to de Villiers raging terror. The efforts of the batsmen took South Africa to their highest ever ODI total, putting 439 runs on the board to a spiritless West Indies bowling effort.

West Indies performance with the bat was pretty ordinary in context to South Africa’s as they didn’t even manage to put 300 on the board. Chris Gayle‘s struggle continued in ODIs as he out for just 19. Morne Morkel was great with the ball upfront, getting Dwayne Smith’s wicket only to realize that he’d stepped over. Smith went on to score a 65-ball 64 which was inconsequential. Only Denesh Ramdin managed to cross the 50-run mark after that.

Jason Holder, the newly appointed skipper has had a nightmarish outing. He’d be looking to terminate South Africa’s charge in the match at East London. 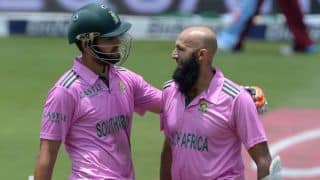