South Africa beat West Indies by nine wickets with 25 overs to spare in the third ODI.

South Africa beat West Indies by nine wickets with 25.2 overs to spare, sealing the five-match series 3-0. The West Indian effort in the field against South Africa in the third ODI of the series at East London was almost as poor as their batting. The fielders seemed lazy and sloppy and the bowling lacked intent. Jason Holder, the skipper was the only bowler who displayed any aggression peppering batsmen with a few short balls and got rewarded with Rossouw’s wicket for it. But apart from that it was a dull effort.

Hashim Amla cashed in adding yet another half-century to his repertoire. He was well assisted by Faf du Plaessis who also got to his half century, being dropped twice. Jerome Taylor and Sulieman Benn were the culprits. In the process, South Africa cruised to victory.

Earlier in the first innings, South African bowlers skittled West Indies for 122. The batsmen lacked intent, and many of them got out to some rash and unnecessary strokes.

Right from the start the West Indian batsmen looked either uneasy or irresponsible. Chris Gayle fell for 1, and Dwayne Smith for 5, leaving West Indies at 6 for two. Vernon Philander with his nagging line and movement got both batsmen upfront. Gayle’s poor run in the ODI form seems incessant. He’s got just one half-century in the last 15 ODI innings.

A little while later, Narsingh Deonarine fell to Dale Steyn, becoming his 150th victim in One-Day Internationals. The wicket left West Indies reeling at 33/3. Steyn got to the landmark in his 96th match with an impressive average of 25.22. With his tail up he soon got his 151st victim in the form of Denesh Ramdin.

After that, the wicket bleed flew on without any signs of relenting. Marlon Samuels got out on 26, which in context of the innings was a decent score. Andre Russell and Jonathan Carter were trying to dig and score sedately but Russell soon fell prey to impatience, giving Morne Morkel the charge and having his timber disturbed.

Carter then fell to Tahir in a marginal lbw call, leaving West Indies without any hope for a revival. Carlos Brathwaite became the next victim of Tahir’s googly, scoring just four runs. Philander got his third wicket in the form of Jerome Taylor for a duck. With West Indies at 96 for nine, one suspected if they’d even make it to 100 but Sulieman Benn smashed a boundary saving them some face.

After that, the tail-enders, Holder and Sulieman Benn tried to take the attack to the South African and were to some extent successful, taking the total to 122 with a few boundaries but finally the inevitable happened, Tahir taking the last wicket 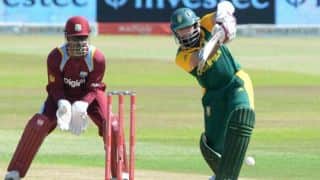