Vernon Philander got Chris Gayle out for 1, and Dwayne Smith for 5.

Chris Gayle fell for 1, and Dwayne Smith for 5, leaving West Indies without their openers even before crossing the 10-run mark as a team. Vernon Philander with his nagging line and movement got both batsmen. Gayle’s poor run in the ODI form seems incessant. He’s got just one half-century in the last 15 ODI innings.

Narsingh Deonarine and Marlon Samuels are now at the crease and will attempt to stitch a partnership or West Indies will not stand a chance. A wicket at this point will put a lot of pressure on the  West Indian middle-order which has been misfiring anyway.

Earlier West Indies won the toss and elected to bat. Jason Holder had no hesitation in making the call. AB de Villiers said even he would have liked to bat first on the seemingly juicy pitch at East London. 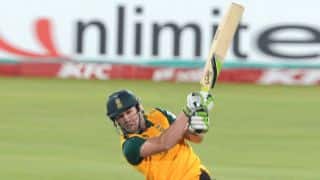 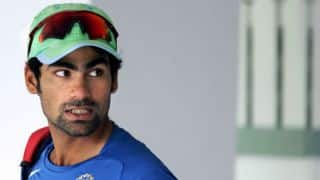 Ranji trophy 2014-15, Round 7: Andhra Pradesh reach 123 for two on a rain-hit day against Himachal Pradesh