West Indies taking on South Africa in the 3rd ODI at East London, won the toss and elected to bat.

West Indies taking on South Africa in the 3rd ODI at East London, won the toss and elected to bat. Jason Holder had no hesitation in making the call. AB de Villiers said even he would have liked to bat first on the seemingly juicy pitch at East London.

West Indies have had a horrid time and will try and prevent the hosts from sealing the series for themselves in this match. Chris Gayle has been in poor form in the ODI-format and will look to make amends in this match. Dwayne Smith and Denesh Ramdin, the two half-centurions from the last match will hope to rise up again.

South Africa don’t have to worry about much as far as form is concerned. They have all played well individually and together as a squad led astutely by de Villiers, who whacked a 44-ball 149 in the previous match at Johannesburg. 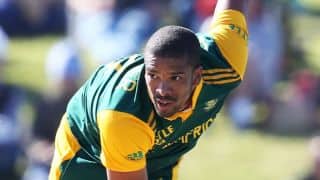