Quinton de Kock will play no further part in the one-off day-night Test after injuring a hamstring while batting on Tuesday.

Heavy workload prompted AB de Villiers to take a break from Tests. Workload has not eluded him as the champion cricketer made his way back in the longer format. Not only de Villiers is captaining South Africa in the ongoing four-day Test against Zimbabwe at Port Elizabeth but also donning the duties as wicketkeeper in place of injured Quinton de Kock. In a further blow to South Africa, de Kock will play no further part in the one-off day-night Test after injuring a hamstring while batting on Tuesday.

De Kock was not in the field for second day’s play on Wednesday and de Villiers kept wickets. A statement from Cricket South Africa (CSA) said scans had revealed a low grade hamstring strain which would keep him out of the rest of the match.

De Kock will remain with the team and is expected to be fit for the first Test against India, starting in Cape Town on January 5. 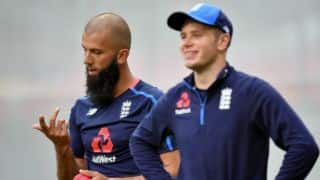