South Africa completed a 3-1 series win, the first time they had beaten Australia in a home series since 1969/70.

Vernon Philander sent Australia crashing to defeat with a sensational spell of bowling on the fifth day of the fourth Test against Australia at the Wanderers Stadium on Tuesday. Philander took a career-best six for 21 as Australia were bowled out for 119, giving South Africa victory by 492 runs, a record runs margin for South Africa. South Africa completed a 3-1 series win, the first time they had beaten Australia in a home series since 1969/70.

It brought to an end a series of high-quality cricket and even greater off-field drama, culminating in a ball tampering scandal during the third Test in Cape Town which resulted in former captain Steven Smith, vice-captain David Warner and Cameron Bancroft sent home.

Philander struck twice in the first over of the day. He had Shaun Marsh caught at gully off the first ball. An inside edge looped off the batsman s thigh pad to Temba Bavuma. Four balls later Mitchell Marsh was caught behind without a run having been added to the overnight 88 for three.

It was Philander s 200th wicket in his 54th Test. Peter Handscomb was next, bowled off an inside edge for 24 as he tried to withdraw his bat an almost exact replica of his first-ball dismissal in the first innings. Tim Paine and Pat Cummins were unable to repeat their defiant stand of the first innings, with Paine caught behind for seven and Cummins bowled for one.

Chadd Sayers was caught at third slip off the first ball he faced. At that stage Philander s figures for the morning were 5.2-2-3-6. Morne Morkel, playing in his final Test, had been given a guard of honour by his teammates and support staff when he walked on to the field at the start of the day.

With nine wickets down, Morkel was given the ball but was unable to add to his 309 Test wickets. The final wicket fell to a run-out, with Nathan Lyon failing to beat Aiden Markram s throw from point as he went for a second run off Morkel s bowling.

Man of the Match: Vernon Philander

Man of the Series: Kagiso Rabada 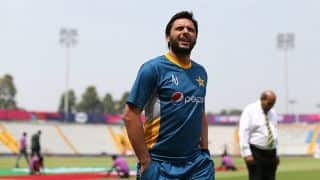