Doolan admitted that it could be a little "frightening" while standing at "bat pad".

Australian batsman Alex Doolan has said that he saw the eyes of the South African batsmen open “wide with fear” while they were facing the merciless pace onslaught by the intimidating Mitchell Johnson.

Doolan admitted that it could be a little “frightening” and “intimidating” for him while standing at “bat pad”.

Standing at short leg to the quickest bowler in the world at the moment, Mitchell Johnson, Doolan is closer than any Australian to some of the most destructive spells ever delivered.

According to News.com.au, following Australia’s first Test win over South Africa, Doolan admitted that he is a little frightened and intimidated while standing at bat pad if he had to watch a ball go at the speed which Johnson is currently delivering.

Doolan further said that he could put himself in the shoes of the South African batsmen and can imagine the fear that they feel while facing Johnson, adding that they need to have the eyes wide open and ready to face any onslaught from a fast bowler of Johnson’s calibre.

Doolan was certainly ready at short leg, taking two blinding catches to get rid of Graeme Smith and JP Duminy in South Africa’s second innings, yet it is a position he has hardly occupied at state level, the report added. 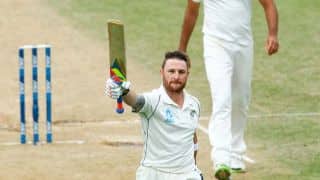